Universal Business Academy(UBA) is a registered Training Centre with the Ministry of Human Resources (Pembangunan Sumber Manusia). UBA is registered under Category A which enables it to conduct in-house and corporate training. The mission of MOHR is to develop a workforce that is productive, informative, discipline, caring and responsive to the changing labour environment towards increasing the economic growth and hence create more job opportunities and to encourage and maintain conducive and harmonized industrial relations between employers, employees and trade unions for the nation’s economic development and wellness of people. 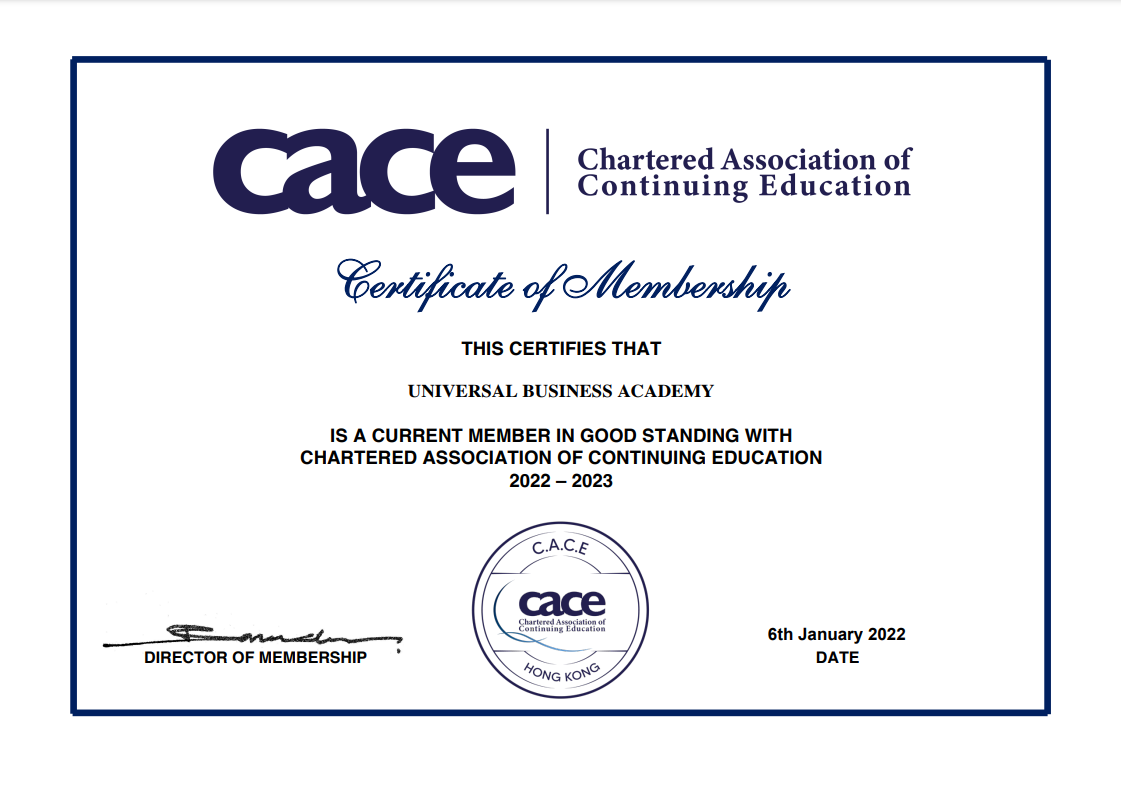 The Association has a growing global presence with institutions and members employed in all sectors of continuing education, including professional education, higher education, technical and vocational education and training.

Universal Business Academy(UBA) is a satellite centre for Awards for Training and Higher Education (ATHE) which provides international programme pathways to universities. ATHE is an awarding body in the United Kingdom. ATHE qualifications are on the QCF (Qualifications and Credited Framework) and provides study progression to various universities in the United Kingdom and recognition by public and private sector employers. Each qualification is also accredited by qualification regulatory authorities in England (Ofqual), Wales (Welsh Government), and Northern Ireland (CCEA).

Completing on Campus in the UK

Most universities in the UK will accept the Universal Business Academy 120 credit programme for entry onto the BA/MBA Top up on campus. ATHE also has direct agreements with several Universities, Click here for the ATHE progression routes. Students may also contact the admissions department of their chosen university directly.

Progress to a degree Top-up

A Top-up degree allows you to do exactly what its name suggests: to top-up your qualification to an honours degree or an MBA. ATHE qualifications are on the QCF and recognised internationally, however, depending on your career ambitions, you may decide that it’s worth studying a little longer for a university degree.

Topping-up to a degree will typically take between six and twelve months of further study depending on what degree you intend to pursue. Part-time/distance learning courses are also available.

ILM is the UK’s leading provider of leadership, management and coaching qualifications, and a City & Guilds Group Business. UBA is registered as a Recognised Provider from ILM to offer Executive Diplomas  endorsed by ILM, which are awarded by The City and Guilds of London Institute.

ILM offers leadership and management qualifications through our network of accredited centres worldwide. Not only are ILM’s qualifications industry-standard,
ranging from team-leading programmes to diplomas for senior directors, but they also help to retain and motivate staffs too.

Learning Resource Network (LRN) is recognised as an awarding organisation by Ofqual. LRN creates qualifications for educational institutes, training providers, schools and employers. LRN has a wide-ranging qualification portfolio including Teaching qualifications which are offered by Universal Business Academy. All LRN qualifications are internationally recognised by employers, governments and professional bodies as providing proof of the skills and abilities they are looking for. 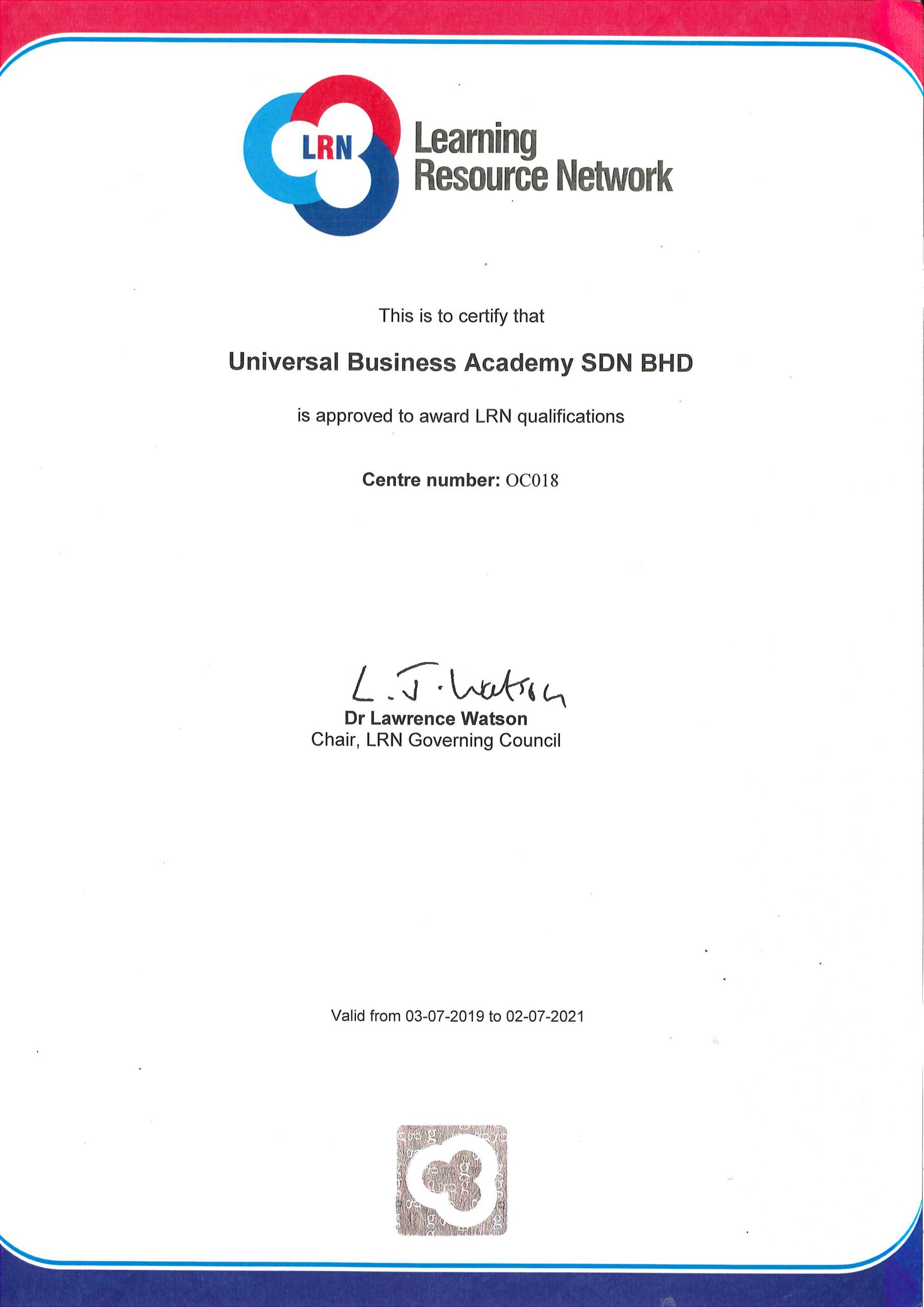 Credential: North Borneo University College is the first private university college in Sabah which is registered with the Ministry of Education Malaysia and is a Full Member of The Association of Commonwealth Universities (ACU), UK.

Jesselton University College is a private higher education institution headquartered that has been established for over 20 years in Kota Kinabalu, Sabah, and is managed by qualified, knowledgeable, and experienced teams of highly motivated and committed human resources.

The Institute of Administrative Management (IAM) is one of the oldest management institutes in the UK, having inspired professional business managers and administrators since 1915.

IAM is on developing professional administrators, administrative managers and managers. They do this through their membership services and qualification programmes to help individuals develop skills, build successful careers and fulfil their potential.

What is Administrative Management?

Administrative management is at the heart of every successful organisation playing an essential role to ensure that businesses run smoothly.

It involves all types of business management and administration. Any middle or senior manager who is involved in the planning, co-ordinating, directing, or controlling aspects of a business can be considered an administrative manager. Administrative managers ensure there is effective information flow and that resources are employed efficiently across an organisation.

By Completing our EMBA programs, learners are eligible for IAM membership at the highest grade of Fellow and permitted to use the designatory letters FInstAM.

IAM offers a full range of membership benefits for learners, employers, and training providers. So whether you are just starting out in your career, or have years of business experience, we have a membership level to suit you. 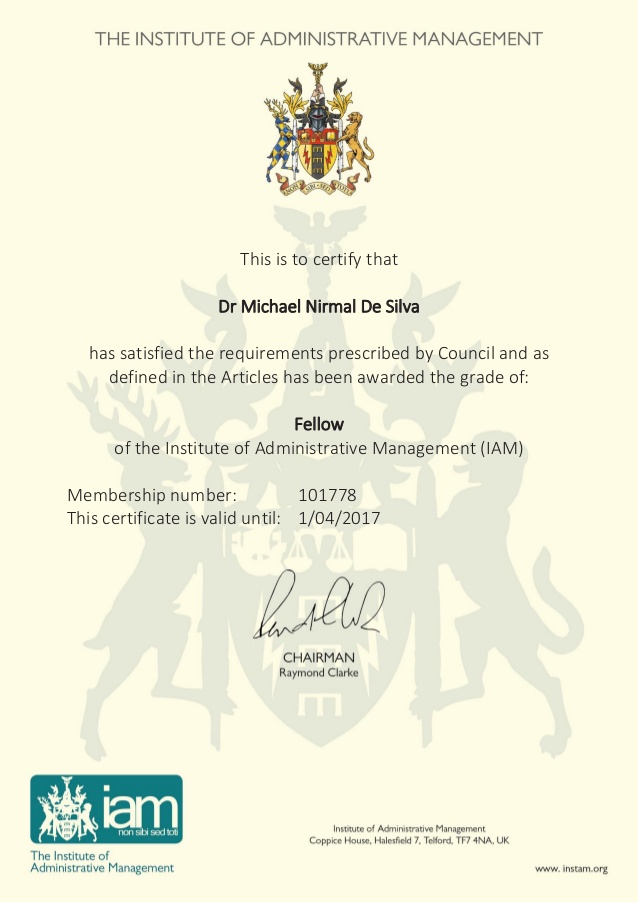 Universal Business Academy(UBA) is a partner school of Binary University, Malaysia. Binary University (hereafter called Binary) is a 5 –STAR (excellent) rated university by the Ministry of Education (MOE) Malaysia, the highest rating accorded to any public or private university. The university is an accredited member of the Association of Commonwealth Universities (UK) and International Association of Universities (France)
Binary accept UBA graduates who have successfully completed the IEMD MBA awarded by IEMD Graduate Business School, Spain to complete the final part of the Binary MBA which consists of 3 taught modules and a Thesis. UBA also provide recruitment services for qualified students to pursue the Binary PhD.

Universal Business Academy(UBA) is an affiliate of Cambridge International College (CIC), UK. CIC is an accredited British College providing superb modern Career Training to tens of thousands of people worldwide. CIC Members study through CIC’s popular and professional distance-training methods or can study anywhere  with the support of CIC appointed local organisations offering campus or tutorial assistance. For 80 years CIC has been a world leader in professional, accredited study and training. CIC`s Principal, Vice Principal, Directors and staff have a vast wealth of experience of providing the very best education internationally.

Universal Business Academy(UBA) is an exclusive provider of IEMD Graduate Business School, Barcelona, Spain. The higher education system in Spain is characterised by the coexistence of formal education and non-formal education. Formal education is where the educational system specifically refers to the norms of university education, whilst private business academies and schools are comprised in the so-called non-formal education since they do not form part of what the Spanish law considers the university education. However, private business academies and schools reflect an education based on two imperatives: the careful selection of applicants, and the training of those participants to reach an individual level of excellence corresponding to the demands of the business world. IEMD Graduate Business School is registered with the appropriate authorities under the Spanish Law and is organised exclusively to provide executive education particularly Executive Master of Business Administration, Focused Programmes, and Organisational Specific Programmes (OSP).

Universal Business Academy(UBA) is a Partner School of London Teacher Training College (LTTC). Based in South London, the London Teacher Training College was established in 1984 and has over the years trained a vast number of TEFL teachers from around the world. The college prides itself on the quality of its courses and the individual attention it provides every student who enrols. There are now over 100 partner schools worldwide which offer LTTC teacher training programmes. Students can take our courses by distance learning or in a classroom environment.

Universal Business Academy has accreditations from multiple regional and global accrediting councils.
Our accreditations provide an assurance to students, educators and institutions that our university offers  quality degree, diploma and certificate programs and all our offered programs follow international education standards.